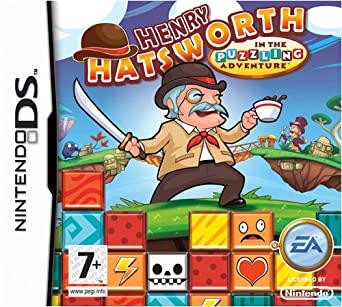 Released in 2009, Henry Hatsworth in the Puzzling Adventure started off as a demo for flash as Monkey Business and after being pitched to EA Tiburon they decided to develop the game for the Nintendo DS. The critics praised the design and techniques used overall but felt that there were some hard to miss technical glitches.

Henry Hatsworth is on mission to locate the lost Gentlemen’s suit. It is a golden suit that allows the wearer to control the puzzle realm and capture treasures from there. Joined in his quest by his assistant Cole, Henry sets out and finds the first piece and discovers that he needs a certain piece to close the connection between realms. He discovers his rival has captured the piece and is using it to try and control the realms.

I have never heard of this game but the idea of a platforming adventure puzzle game is something that I am curious to try. Chances are it is one the list because the selection committee played the game once when they were younger and has a sentimental attachment to it but who knows.  Let’s get to the scores!

So the scoring begins messy. The graphics of this game have to be split into two separate parts and then averaged. The platform and cutscene graphics in Hatsworth are great. It is a fantastic indy game cartoon graphic style along the lines of Braid or Super Meat boy. Which is a great style for a game to be and if that were the end of it the game would get a 5 in graphics. Unfortunately, the developers decided to add another genre and half ass it at that. The puzzle aspect of the game is not drawn as well as the platform aspect making it look like it was a last minute addition. Which I would give a 2. So the graphics in the game come in with a 3 out of 5.

The sound in this game is a mixed bag. The music track is entertaining and enjoyable no matter the level or scene. For the most part, the sound effects are also enjoyable and mix well with the rest of the game. However, the sounds they use for the dialog is horrible. Enough so that it makes you want to shut the sound off and miss out on the rest of it. For the dialog noises it is random heys, huhs, laughter and what I can only describe as throat clearing noises. I don’t know if they ran out of budget or just thought this was good but they are wrong.

This game is a strange one. You have a platform adventure game AND a puzzle game and you have to switch between the two occasionally in order to not lose the puzzle aspect, which really is the hardest thing about the game. If you remember to regularly switch to the puzzle mode and clear out the blocks you will be ok. Quite frankly, the only thing that made this game difficult was trying to play it while rewatching The Madalorian. Otherwise, the game is rather easy.

So here you have a platforming puzzle game, That is too many things. The two elements of the game coexist and they fuel each other but they don’t really feel fully connected. You can remove one aspect or the other and still have the same game. The developers tried to be creative and instead created a game where you are only half focused on each aspect and not enjoying the full game. If you were to have one or the other you would be able to enjoy the game fully but that does not happen here.

Does it hold up:

Henry Hatsworth holds up well to the test of time. The graphic styling and the aspect of the sound that doesn’t want to make you throw the DS at the closest wall are both enjoyable even a decade later. The only thing really stopping you from wanting to play it is the messy nature of the hodgepodge of genres that you are presented with. When revisiting games to play from the past chances are you will pick either a platformer or a puzzle. Not both. You can easily replay this game but why?

Henry Hatsworth in the Puzzling Adventure comes in with an overall score of 3 out of 5.

The game is just average from start to finish. Had the developers concentrated on one aspect of the game and made it the best that they could, the score would probably be a lot higher and the quality of the game would be 1001 games high but they did not. Instead they half assed two genres and ended up with this game. Not a bad game and you should give it a play if you are curious but fit is not really necessary.

I am sure the book has some sentimental reason as to why the game deserves a spot on the 1001 Games list. I am sure if I bothered to read the entries anymore I would be calling bullshit and moving on. There is nothing in this game that shows that it should be on the list and playing it doesn’t change my mind. The game is not horrible but not great and not something that should be remembered forever.

What are your thoughts? Agree/Disagree? Have something to add? Leave a comment down below!  Do you want to help the Journey progress? Visit the Sponsor a Game page for more details to help keep this train rolling!

My Journey to Play 1001 Games You Must Play Before You Die. View all posts by ChachiSays